OC Weekly: What kind of stuff do you play?
Maggie Gutierrez: People know me as playing old-school techno and jungle. I've been playing a lot of dub, reggae, down tempo and old funk. A lot of my sets lately have been five-hour sets, and I've had to extend it all, so I'll mix in classic rock or New Kids or Footloose—I'll mix it in with techno. I like being funny, depending on where I'm playing.
When you play a five-hour set, how do you go to the bathroom?
I'll find a long record and run to the bathroom and then run back.
Where did you learn to DJ?
I taught myself because no guys wanted to teach me. Ten years ago, there weren't that many girl DJs; now, there are. My dad would buy my brother and sister any instrument they wanted, and I had a tough time convincing him that turntables were really an instrument.
Do people say weird stuff to you while you're deejaying?
All the time. The other night when I was playing Chaka Khan, someone asked me if I was going to keep playing industrial music. I'll be playing hip-hop or something, and someone will come up and ask if I have the Cure. I bring so much different stuff that no one can really complain. I try to keep everyone happy. I don't play anything annoying.
So what music have you been into lately? Kraftwerk is something I'll always play. I've been listening to a lot of dub lately. I'm really into Mr. Oizo; he uses a lot of analog—he'll do hip-hop; he'll do house. He's awesome. I can bring his album and play it in so many different sets. I also like Omid. He put out an album called Beneath the Surface. I have a promotion company called Anything Fresh. We used to have a store in —I do it out of my house now. Its music, clothing, jewelry and artwork. I recycle vintage clothes; I promote my friends' music.
So do you know how to do all that crazy DJ shit?
I'm always learning. I can scratch, but I'm not a battle DJ. If you want to pull something like that off, you have to be the sickest, especially if you're a girl. I can scratch to the rhythm; I can match beats—I've been matching beats since I first started.
That's what they call them? DJs?
Yeah, they can battle someone else and be able to top them. It's insane. People play backwards and stuff. It's amazing. Guys will sit in their rooms all day and practice and practice. I think girls actually pick it up faster—any girl can pick up the turntables really quickly, but the guys are the ones who will spend six hours in their rooms practicing scratching.
By ALISON M. ROSEN
Posted by Generations at 10:55 AM

Generations
Our mission is to celebrate hip-hop culture as a positive force in the community that transcends generations through a passion for dance, music and art. 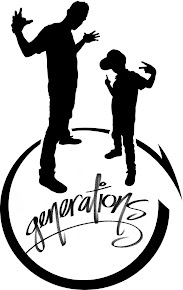